In between some rather scantily clad selfies, Miley’s Twitter followers know she loves her dogs. In total, Miley has rescued six pups. She summed up her thoughts on the topic in a recent tweet, “There’s times when I think we don’t rescue them, but they save us.” Check out more of Miley’s tweets @MileyCyrus

This “American Idol” winner famously houses 50 rescue animals in all – 30 dogs, 14 horses, 4 goats and 2 pigs – on her 14-acre Texas ranch. That’s a lot of pets this celeb tweets about! Sadly, her miniature labradoodle, Joplin, died last November, just six weeks after she sent this heartwarming tweet. Kelly (@kelly_clarkson) notified her fans of his death via Twitter again, with this photo:

Justin Bieber’s ex doesn’t post as many pics as we’d like to see of her adopted pup, but ask and she will deliver. Selena (@selenagomez) grew up on a Texas farm around adopted animals. She tells People Pets, “It just never made sense … not to get a shelter dog.” It’s reported she and Justin picked the Husky mix in late 2011 from a Winnipeg shelter. 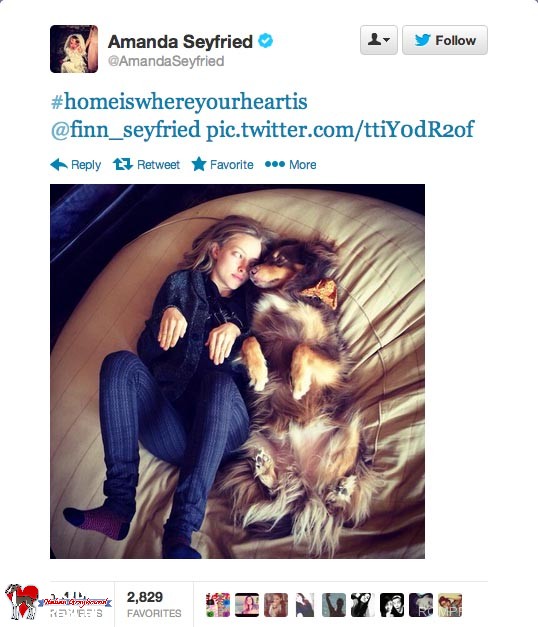 Arguably the most famous celeb dog on Twitter, Finn Seyfried, Amanda’s rescued Australian Shepherd, is the subject of many news articles and blog posts, has been on late night television, and even has his own handle @finn_seyfried where he posts tons of amazing selfies like this one: 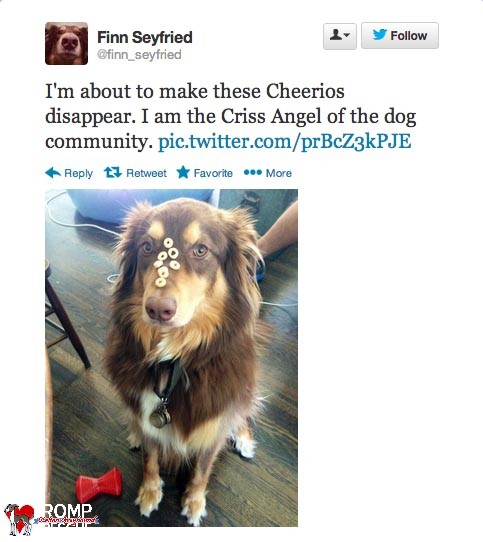 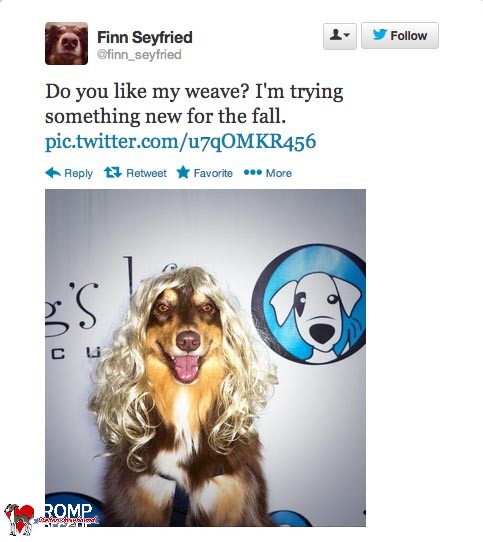 Amanda also posts tons of pictures of Finn on her Twitter @AmandaSeyfried.

Kristen (@IMKristenBell) and her husband Dax Shepherd are parents to three rescue dogs. Kristen loves tweeting and publicly commenting on their antics. She tells People Pets, “They’re never mad at me. They’re always happy to see me.”

This “90210” star and her husband have been a hot topic for celebrity gossip magazines lately, but Tori (@torianddean) seems to be coping by opening her heart up to another adopted dog from an L.A. shelter. The new pup will join Tori and Dean’s five kids, two other dogs – Mitzi (pictured above) and Hattie, pig, chicken, and goat.

Sharon (@MrsSOsbourne) often publicly refers to her adopted Teacup Pomeranian, Bella, as her ‘child.’ “The Talk” host and her famous rocker husband, Ozzy, have 12 dogs in all, including two other Teacup Pomeranians named Pippy and Mr. Chips along with an English bulldog called Lola.

This “Glee” star is a well-known animal advocate and PETA spokesperson. She also volunteers with K9s For Warriors, an organization that pairs rescued service dogs with veterans suffering from PTSD. And it seems Jane (@janemarielynch) and her family keep rescuing dogs to keep themselves, too.

While this “Hot in Cleveland” actress doesn’t have children of her own, Wendie (@WendieMalick) has adopted several animals that she houses on her ranch. She tells People Pets, “We are so lucky. I consider myself so blessed to have animals.”

Mandy (@TheMandyMoore) seems to be more of a cat person than anything *cringe* but she shared this pic of her adopted dog Joni, who is named after the singer Joni Mitchell. This A Walk to Remember star is also mom to a second rescue dog, Jackson, as well as three rescue cats.

What you Need to Know Before Adopting an Italian Greyhound