We are honored to be the first Chicago Rescue picked to show off our four legged Italian Greyhound Puppies in this, the 10th, annual Animal Planet Puppy Bowl X show.  It is about time Animal Planet featured a few slender, long legged, big chested, skinny waist pups!  There will be not one, but two Italian greyhound rescues from ROMP Italian greyhound Rescue running the field and playing with the pigskins this year, meet Taser and Sharpie. #TeamTaser #TeamSharpie #AnimalPlanet #PuppyBowl #Puppybowl2014 #PuppyBowlX 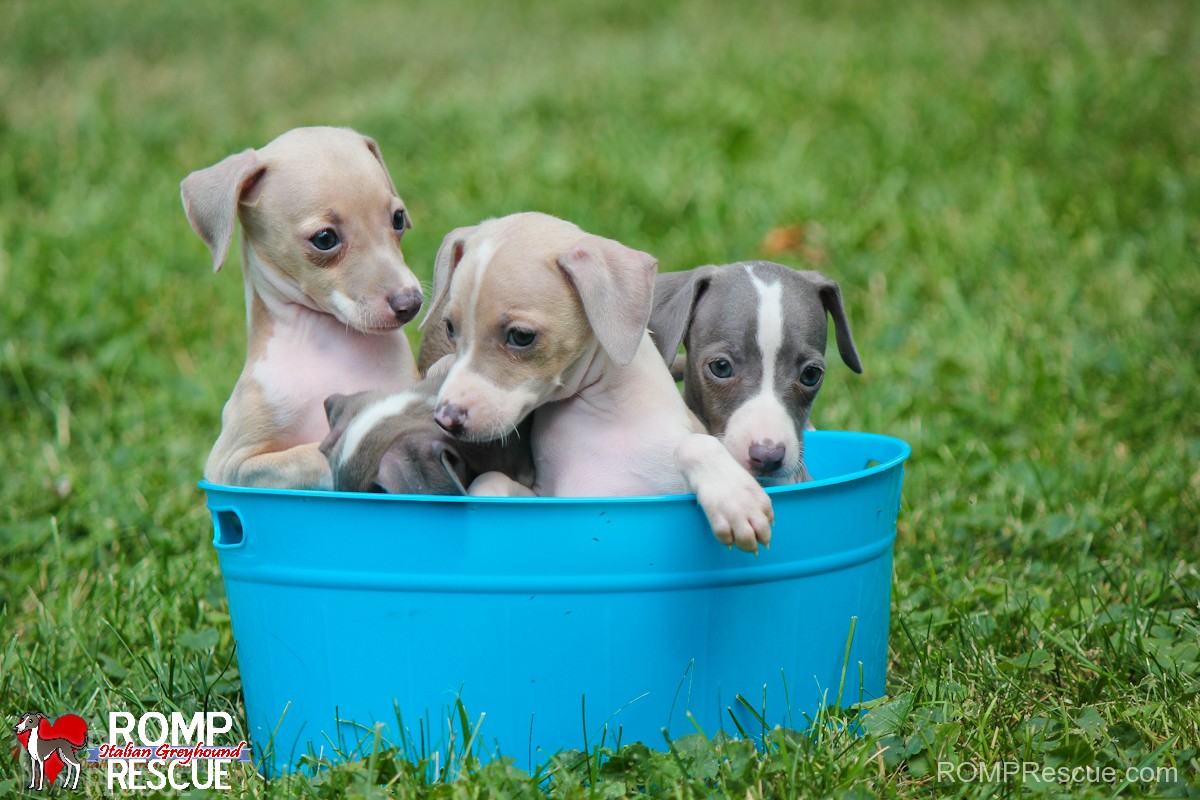 As the story goes, ROMP Italian Greyhound Rescue saved a 10 year old puppy mill mama in May 2013.  After a few weeks in rescue, Kai (the name we gave the puppy mill survivor) started to look a little plump which confirmed our suspicion that she was pregnant with puppies!   We were sad to see her have to care for another litter as that is all she ever did in her 10 years at the puppy mill, but we were glad she was able to do so in our care where we had warmth, good food, vets and lots of love to surround her. Then, on a early summer morning, June 28, 2013 she gave birth to 4 healthy baby boy Italian Greyhound puppies that we named Taser, Sharpie, Crawford and Hossa. Yes, that was the same day the Chicago Blackhawks had their Stanley Cup parade and the Italian Greyhound puppies were named after key NHL Blackhawks hockey players in hopes that they too would find lots of success in their lives.  Little did we know how much luck and success these boys would find…

After they started to crawl around, Taser and Sharpie expressed an interest in football. We found this funny seeing as we named them after hockey players but without thumbs they didn’t have much hope for ever making the NHL.  We started to work with them on learning plays, catching footballs, becoming a fast runner and mastering the art of the tackle. Luckily for us, this came easy to them seeing that’s all puppies ever do (as long as your football has a squeaker in it).  We didn’t know if they could handle the pressure if they made the team, but we obliged and submitted them to be considered for the Puppy Bowl X game in 2014.  We were excited but not nearly as excited as they were when they found out they were indeed chosen. It was not stop jumping and barking for weeks until the filming day! It goes to show that no matter how small, skinny, or young you are – with enough practice you too can make the Puppy Bowl if you try hard enough (and you’re a pup).

You can catch Italian Greyhound puppy rescues, Taser and Sharpie, on the Animal Planet Puppy Bowl X field later this year. It airs on the Animal Planet channel February 2, 2014 at 3pm pst/est or 2pm cst.  Remember, vote #TeamTaser or #TeamSharpie for viewers choice MVP and check back at AnimalPlanet.com for more on their adoption stories: http://animal.discovery.com/tv-shows/puppy-bowl/photos/x-starting-lineup.htm and http://animal.discovery.com/tv-shows/puppy-bowl/photos/x-back-up-pups.htm

A photo story of Taser & Sharpie, our rescues playing in the Animal Planet Puppy Bowl X… from birth to Puppy Bowl and beyond! Warning: excessive cuteness!

Just when you thought Puppy Bowl couldn’t get any better, the 10th anniversary Puppy Bowl X is making things interesting!

You can join us at Chicago’s Deuces and Diamonds (3505 N Clark St, Chicago, IL 60657) on February 2, 2014 for the official ROMP Rescue Puppy Bowl viewing party where you can meet the local Chicago Italian Greyhound Puppy Bowl stars, get pictures with them, get their pawtograph, take part in raffles and giveaways, and watch the four legged fur balls compete in an epic puppy bowl show down.  Puppy Bowl starts at 2pm so you’ll have plenty of time to make your Super Bowl Party or feel free to stay after and watch it with us!

If you can’t make our viewing party, tune in to Animal Planet and watch them from home! If you use Twitter, post photos with @AnimalPlanet #PuppyBowl and maybe they’ll show your pictures on air too!

Like us on Facebook to receive updates on our rescue stories: http://www.facebook.com/ROMPItalianGreyhoundRescue If you are media looking to contact us regarding our involvement in the Puppy Bowl, to learn more about our rescue, or someone looking to arrange a rescue meet & greet or fundraiser: info@ROMPRescue.com

A Chicago featuring Sharpie on Fox News in Chicago

Taser & Sharpie and their forever mama’s talk to WLS 890am 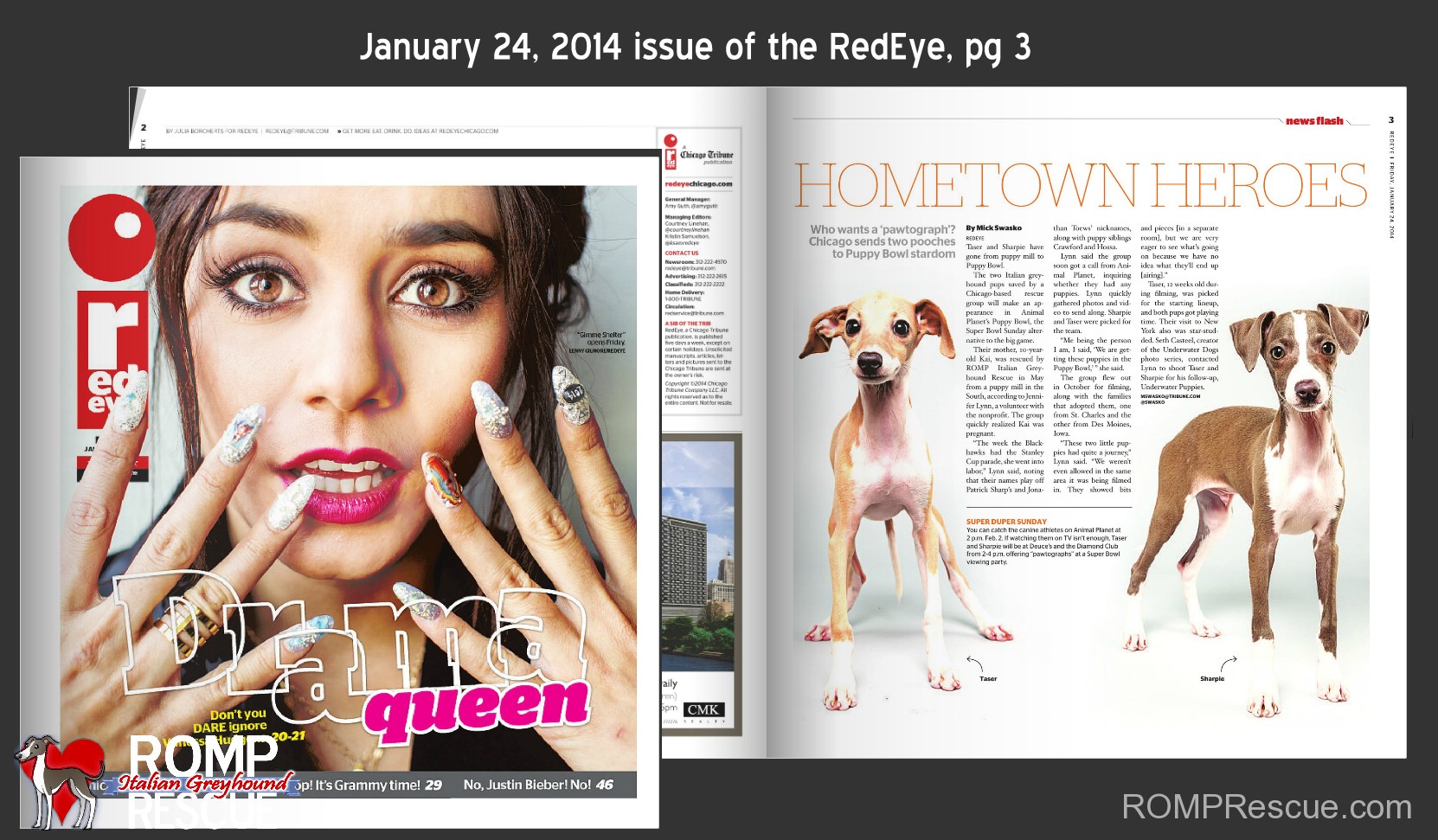 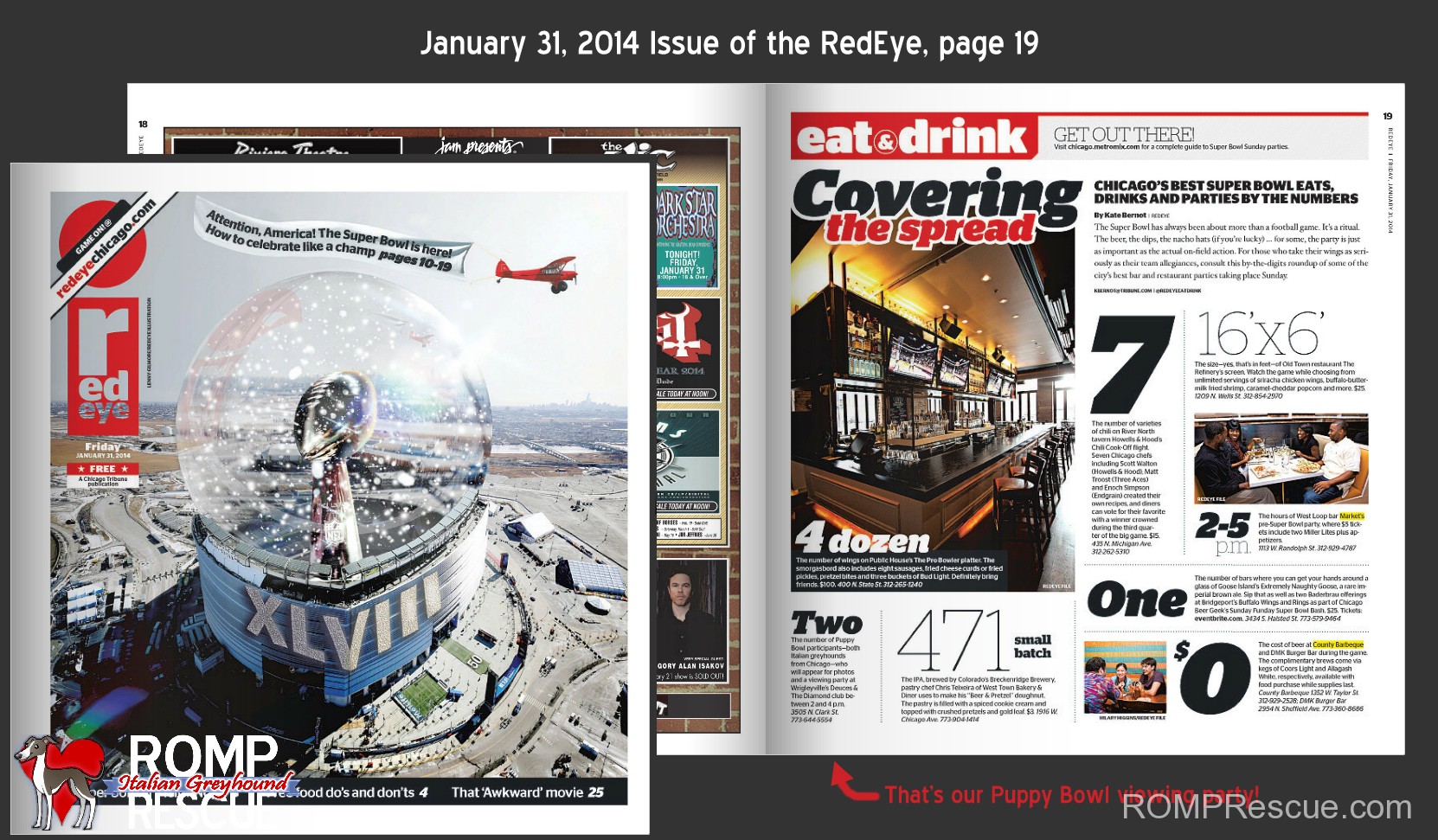 Articles in the RedEye talking about our Puppy Bowl Italian Greyhound players and our game day viewing party in Wrigleyville!

Happy New Year from the Dogs at ROMP Rescue!