Salvador came to ROMP as an owner surrender just at the tender age of 6 months, we were not aware of his canine congenital megaesophagus condition.  He soon found his way to Rachel and Angelo’s home with their other fur baby Neils.  It was there that they discovered he had Canine Congenital Megaesophagus.  They knew something was not right when he had a hard time eating. Everything he ate he couldn’t keep down or solid pieces of food. He would regurgitate them and re-consume them until they were more of a liquid substance. This is common symptom for dogs with congenital megaesophagus.  A doctor quickly addressed the issue and referred little Salvador to a specialist where they diagnosed the condition.  For dogs that have this disease, it cannot be cured.

The cause is an esophagus that is loose like a balloon rather than tight like a pipe. The muscles that are normally in an esophagus are not there for one reason or another.  Thus, they have a hard time pushing hard food down their throat – it comes back up. 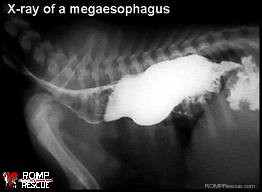 To treat the symptoms of a dog that has megaesophagus, there are a few options. You can try feeding the dog while he/she is standing up. Gravity will help the food make its way down the esophagus.  To aid in this they make special chairs for dogs that you strap them into. It puts them in an upright position that they cannot wiggle out of. Once they are done feeding, you can release them and they go about their way.  The next option would be to liquefy all their food.  This is helpful even if you feed them standing up.  And finally, the least desired option, would be for surgery. 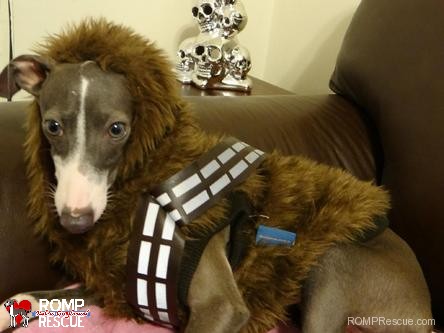 All dogs are different.  There is a chance that, because Salvador (formerly called Sam) is so young that he will grow out of the condition.  The doctor visits, testing, and supplies for Sam aka Salvador are very expensive.  So far his bills are around the $800 mark.  He is worth it but we are asking anyone that feels compassion for poor little Salvador to donate to offset his medial expenses!

The YouCaring fundraiser for Salvador aka Sam is below.

We are hoping that items like the Super Neck Hug http://www.wagtailfarms.com/superneckhugs.html will help him sleep through the night without regurgitating and the Bailey chair will help him eat again.  Keep Salvador in your thoughts and prayers.

The Knot House – Thank you!